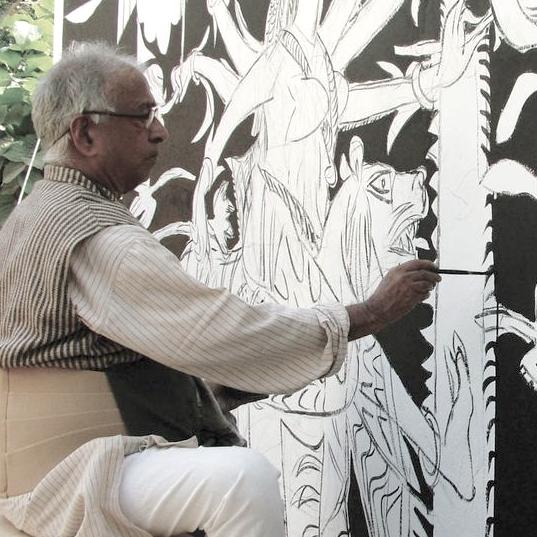 (1924 - 2016) Born in Kerala in 1924, Subramanyan received his art education at Kala Bhavan, Santiniketan, and the Slade School of Art, London. He continued painting and teaching over the next few decades, and was appointed a fellow of the National Lalit Kala Akademi in 1985, and a Christensen Fellow at St. Catherine’s College, Oxford, in 1987-88. Subramanyan also served as Dean at the Faculty of Fine Arts, M. S. University, Baroda, and in 1989 was appointed Professor Emeritus at Santiniketan. He has had numerous solo and group exhibitions, and participated in several major Biennales and Triennales. In 1966 Subramanyan was awarded the John D. Rockfeller III Fund Fellowship. In recognition of his varied contributions to the development of Indian art he was awarded the Shiromani Kala Puraskar by the Government of India in 1994. A retrospective exhibition of his work was held in 2003 at the National Gallery of Modern Art, New Delhi and Mumbai. Subramanyan was awarded the Padma Bhushan and the Padma Vibhushan by the Government of India in 2006 and 2012 respectively. At the age of 92, he passed away in Vadodara in June 2016.